YA Author Interview from the Verge: Kama Falzoi Post 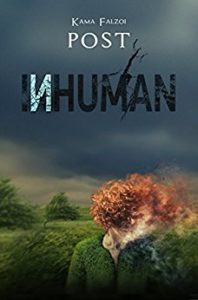 I love to introduce new authors! Kama Falzoi Post is here for the first of a two-part interview in preparation for her upcoming YA novel, InHuman. With Nanowrimo in full swing, it’s great to find out that a newly published author wrote her novel during Nano. In other words, don’t give up. I’m thrilled to introduce Kama Falzoi Post.

Kama, tell us a little about yourself.

Someone told me, “You can do anything, but you can’t do everything.” I chose writing and stuck to it. My stories have appeared in a variety of print and online magazines, including Inkwell, SmokeLong Quarterly, and most recently in the anthology Outliers of Speculative Fiction. My first Young Adult novel, InHUMAN (BookFish Books) is scheduled to release in December of 2016. I live in the cold Northeast with my husband, son, step-kids, and a plethora of animals.

This all started with NaNoWriMo? How did you get involved in it? Was this your first time?

The idea for the story was pretty solid in my head. Since NaNo lurked just around the corner, I took it as the stars aligning, and decided to go for it.

What did you think of Nano?

It was helpful in so many ways. Fifty thousand words can seem daunting, but when you see others experience the same hardships and successes as you, it becomes doable. And borderline fun! Because in order to get that many words on paper in that short amount of time, you have to pretty much trample your inner editor and leave her writhing in a ditch. As a writer, that’s a difficult thing to do. Without that constant voice telling you how much you suck, you’re free to unleash whatever you have inside. Nothing beats the feeling of accomplishment when you hit that goal.

Are you a planner or a pantser?

I am a recovering pantser. NaNo was pantsing it all the way. I learned the hard way that pantsing doesn’t work well for me. I would rather take the time upfront to brainstorm a skeletal structure, theme, and some character arcs, because going back to the manuscript afterwards and cleaning up fundamental plot and character issues is a monumental chore.

What was your prep method?

It was very complex. I sat at my computer and started banging out words.

Do you use a novel writing software (Scrivener, etc.)

Nope. I used Microsoft Word and a notebook that I carried everywhere in case inspiration struck.

Give us an idea of your thoughts at the beginning, middle, and end of Nano.

Looking back, it was analogous to a race. I started at the gun with a lot of energy, hit my stride, smiled into the wind and so forth. Halfway through and thousands of words behind, I began to doubt myself. Times like that you have to rely on discipline. It’s a dangerous time but it doesn’t last long. I powered through it, got out the (mostly terrible and completely unusable) words, and headed for the final stretch. The last week or so I was just looking at word count. I think I had actually finished the story and had no idea where to go with the rest.

After Nano, what was your first instinct – how did you feel about the novel and did you think it would get published?

Frankly, the novel was an embarrassment. But that was okay! Because as I found out later, the REAL writing starts when you begin to revise. My initial stab gave me a great foundation for what was to come, but it would take a lot of work to get there. I didn’t think it would ever get published. I moved on to the next thing.

How long did it take to get the book in “publishing shape?”

Years. Years and years. Like I said, I had a foundation, but it needed refining. I had to chip away at everything to figure out what I wanted to say. Then rewrite, and rewrite, and rewrite. Each rewrite took me a little closer to my goal. Eventually, I felt like maybe I had something.

What venues did you pursue to get your book published?

I queried agents for about a year. I had NO idea what I was doing. With each rejection, I polished the manuscript a little more, and polished the query even more. I did a few Twitter contests. Finally, a publisher (BookFish Books) showed interest and asked for a synopsis and my first ten pages. After about a week, they requested a full. I signed the contract a month later. The full story of my road to publication is published on my blog here, with a nice call out to NaNo! https://kamafalzoipost.wordpress.com/2016/01/21/the-road-to-publication-is-not-paved-at-all/.

What was the most difficult thing about the Nano? About the entire process?

For me, the most difficult thing is always finding time. I have a demanding full-time job, two teenage step-kids, and a five-year old. What may traditionally be a months-long process for some becomes a years-long process for me because of my obligations. I’m working on that…

Will you come back to tell us more about your book, INHUMAN?

I would love to!

Watch for Part 2 of our interview with Kama Post and get ready to purchase InHuman from Amazon on December 15!