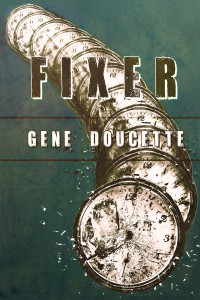 Welcome to Gene Doucette, author of Immortal, Hellenic Immortal, and Fixer. Gene is probably pretty tired from hitting the web for his blog tour, but he made time for a few questions from me.

The Immortal books are very different from Fixer. Did you enjoy writing one more than the other? Adam and Corrigan are quite different as well. Was one more fun to write? Did one interest you more?

They are very different books in a lot of ways, although I’d argue that in both cases I wrote on a dare.  With Immortal I basically started out with the idea of a blogger that also happened to be immortal, and I made it all up from there.  With Fixer I thought hey, what if there was a guy who went around saving people like a guardian angel, only without anything supernatural or religious getting involved?

In most ways writing as Adam is just about the most fun I’ve had, because once I’m in his voice I’m as surprised as anyone by what comes out.  At the same time, writing a novel from first person is hugely difficult without cheating.  (Cheating, in my mind, is revealing something the main character didn’t witness directly by using “what I learned later was at that very moment…” Cheating can also come in the form of the secondary character massive expository dump.)  Fixer being in third person was a tremendous relief, and I took full advantage of it.

So I’d say Adam was more fun to write, Corrigan was easier to write, and both interested me at the time I wrote them.

What inspired you to write Fixer?

I guess I kind of answered that already but just in general I only ever finish books if the idea I started out with turned out to be more complicated each time I pulled at it a little bit harder.  Fixer started off as something simple, but every time I peeled back a layer and asked, “but if this is true, then what does that mean?” the story got more complicated.  And then came the challenge of trying to keep that level complexity without burying the reader in all of it, and making it as lucid as possible.

What’s your next book going to be?

I am in the middle of a project I’m not sure I want to reveal in detail right now, because I’m not finished with it and I’m not convinced yet that it’s any good.  And I’m doing it because it’s the bigger challenge than the third Immortal book everyone is waiting for.  That third book is still coming, but it needs to marinate a little longer first, and this other thing is what I’m doing in the meantime.

What question are you never asked that you wished you were and what’s the answer?

Nobody ever asks me if I can dance!

As for my Mini-Spoiler Free Review…

Surprisingly, I liked Corrigan Bain more than I liked Adam from the Immortal series. I think it was his the way he handled his “gift” with more responsibility and less sarcasm. Gene has really grown as an author and Fixer is evidence of that. The story is well crafted and the characters are interesting and believable… as believable as they can be in the situations that they are in!

I highly recommend Fixer. It’s a story that stays with you and makes you think.

In addition to ghost writing for an immortal man, Gene Doucette has been published as a humorist with Beating Up Daddy: A Year in the Life of an Amateur Father and The Other Worst Case Scenario Survival Handbook: A Parody. He is also a screenwriter and a playwright. Gene lives in Cambridge, MA with his wife and two children.