Go Set a Watchman and Get Over It 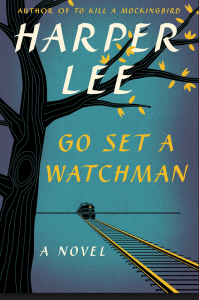 To Kill a Mockingbird is my favorite book in the world. It is told through Scout’s young eyes and expresses how she saw her father as a hero when he defended a black man accused of raping a white woman and took on a mob at the jail when they tried to lynch the man. It is critical to remember that this is all told through a child’s eyes as SHE sees the world. This is not necessarily how the world is.

Atticus Finch. Assigned to defend an innocent man. His acts may have given the impression that he was not racist. But he did live in racist times. TKAM was set in the 1930s, and he could not have avoided the culture if he wanted to.

Twenty years later, Scout, now called by her proper name, Jean Louise, returns from New York to find the racism that she never saw as a youth in its pure form. A form she could see, but not understand. Atticus has attended meetings of the KKK, supposedly to see who was involved, and continues to go to other such racially charged meetings because it’s just the way life was right then. Scout is angry, just like we are. Where is our Atticus? Why, he was there all along. Watching, staying stable, and eventually becoming a human instead of a hero in his daughter’s eyes.

The book was written many years before TKAM, and might have never been printed. Would you have been happy then? With your beliefs untarnished? The title, Go Set a Watchman, comes from the King James Bible: “For thus hath the Lord said unto me, Go, set a watchman, let him declare what he seeth” (Isaiah 21:6). This seems to indicate that the town needs a moral compass to watch over things. Is that what Atticus has been doing or what Scout will do? I’m not sure, but we all know that finally, things change in our world.

I think Atticus Finch was an essentially good man, living in a time when racism was a way of life. I’d like to think he set himself apart from it, but it would have been a chore and possibly a source of infinite loss if he did. He did what he had to do to survive the times and maybe he agreed with some of it and maybe he did not. He said that black people were “coming of age” during this era. He seemed to understand that racial equality was in it’s infancy, but would eventually move forward.

Parts of the novel hurt. Parts educate. Parts enlighten. Scout is growing up. Atticus isn’t as perfect when viewed from an adult’s perspective as a child’s. What did you expect?

It will never be TKAM, but I still believe in Harper Lee and her decision to illuminate fairness, loyalty, and moral conundrums. Stop ranting and railing and read the book as it is written. Would it REALLY have been better if Atticus was a hero for racial equality? Is his character really different or is it simply that Scout never saw all of her father – only the parts she wanted to see and could understand? Calm down. We lived this history.

Are you more angry that Atticus was more than you wanted – a hero with human flaws, just like the rest of us? Or that it reminds us that a few short decades ago this was part of our history?

Opinion is subjective. Please share. But… if you are going to comment, be sure you have read the book. That way your comments will have a basis in the book.